At least eight people were killed and many others injured after a crowd surged forward while rapper Travis Scott was on stage at the Astroworld Festival in Houston on Friday night. 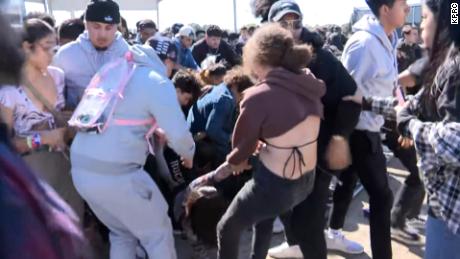 People rush through an entrance at Astroworld on November 5, 2021.

The incident occurred when the crowd surged towards the stage, crushing those at the front who were unable to escape, local fire chief Sam Peña told CNN Saturday morning. That sparked panic, and the situation worsened and overwhelmed security personnel there, he said.

Astroworld issued a statement on Instagram on Saturday morning that said: “Our hearts are with the Astroworld festival family tonight — especially those we lost and their loved ones.

Astroworld is a music festival founded by Scott and held in Houston on the former site of Six Flags Astroworld — this year is its third iteration, as it was canceled last year due to the Covid-19 pandemic. The festival was first launched by Scott in 2018, the same year that the studio album of the same name was released, and the original line-up consisted of performers such as Post Malone, Metro Boomin, Lil Wayne, Scott himself and others.

Who is Travis Scott?

Travis Scott is a 30-year-old US rapper, singer and record producer from Houston, Texas. He is best known for his 2018 album “Astroworld” — which the festival is named after. He is a popular artist and has previously collaborated with other prominent rappers including Drake, Young Thug and others. He shares a child with Kylie Jenner and the couple are expecting again.

Houston is Scott’s home city, and is where Six Flags Astroworld — an amusement park — was once located. That closed in 2005 and Scott named his third album after the theme park.

Who was set to perform?

Have there been problems with Astroworld before?

No previous safety issues around the festival have been flagged before.