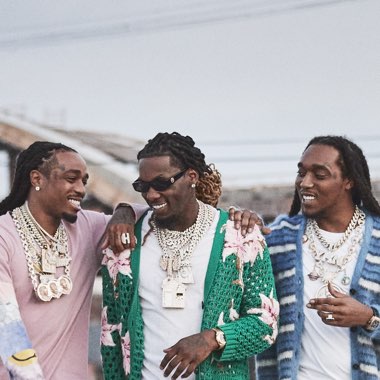 Within months of Migos entering the mainstream with 2013’s “Versace,” it felt like the group’s style was everywhere. The triplet rhythms, the staccato flow, the way they crushed their syllables up against the front end of the bar and capped their lines with ad-libs that flew by like buckshot: It was a sound that felt like a hotline into rap’s id. But there was something hypnotic about it, too: By the time you got through with “Versace,” for example, you’d heard the title so much—nearly 200 times—the word felt atomized, more a weird collection of sounds than something with real-world meaning. Few artists have had that sort of swift or tectonic impact on the culture. Raised in the northern suburbs of Atlanta, the group—cousins Offset and Quavo, and the latter’s nephew Takeoff—started recording while still in high school, Takeoff making beats while Quavo and Offset were out at football practice. Coming through the combine of Quality Control Records (also home to Lil Yachty), they took off quickly, collecting cosigns—Drake, Kanye, Lil Wayne—like Halloween candy. Along with Future and Young Thug, Migos became figureheads not just for the Atlanta trap scene, but also for trap nationwide, pioneering a sound both progressive and hugely bankable (due in no small part, it should be said, to producers like Zaytoven and Metro Boomin). Their first album, Yung Rich Nation, came out in 2015; the Grammy-nominated Culture followed in 2017, with a sequel (Culture II) a year later to the week. Talking to Apple Music around the release of Culture II, Offset described the group’s particular Zen. “You hear that thing—10 seconds, five seconds, 30 seconds in the beat,” he said. “We pull it up and we get right to it. There’s no real thought process—it’s the feeling you get.”